Recently, I held a brief conversation via email with Jeffrey “Trump” Shih of Team SoloMid. Trump is openly a man of few words and rarely does interviews, so we decided to fire a few quick-fire questions his way. 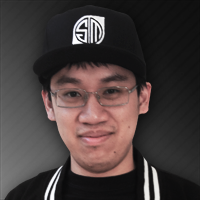 His accomplishments are many, including first place at the recent HTC Recharged tournament. He also placed second in the first Challengestone show match, and fourth in Challengestone 2. As a former Star Craft 2 pro, he played for Vega Squadron, and has dabbled in Magic: The Gathering. In the early days of Hearthstone, Trump became the first professional player in the world when he was signed by Team Razer in October of 2013. However, he parted ways a year later and joined the Hearthstone division of Team SoloMid. Trump has helped countless new players learn about Hearthstone with his Trump’s Teachings YouTube series, in addition to being one of the most educational streams about the game on Twitch.

In the Archon Team League Championships, Trump had the chance to form a temporary team to join in on the fun. Team Value Town consists of Brian Kibler (BMK Gaming), and David “Dog” Caero (compLexity Gaming), and himself as Team Captain. The team is currently 1-1 at the end of the second week in the Team League.

With the week’s tournament wrapped up, I had a chat with Trump about his thoughts on the Archon Team League Championships, as well as Hearthstone in general.

Greetings, Trump! Glad to have you with us here at Hearthstonely. What preparations did Team Value Town make for the ATLC?

We simply drew from what each player was strongest in playing.

Do you feel the ATLC facilitates a team environment, as opposed to the usual individual tournaments?

Do you think Team Leagues have a future in competitive Hearthstone?

What part of the Challengestone show matches did you enjoy the most?

Speaking of Challengestone, do you play Tavern Brawl often?

Usually about 10 games a week.

What are your favorite tournament formats, both as a player and viewer?

Challengestone, brings a deckbuilding format, is new and fresh to watch.

Do you ever talk shop with any of the other professionals before a major tournament, or do you mainly use the ladder to prepare?

Your Trump’s Teaching series is phenomenal for teaching people the basics. How do you feel Hearthstone can be improved for new players?

Arena should be able to award Classic packs.

If you could remove one card in Hearthstone, what would it be?

In a recent Reddit post you impressed us with your freestyle skills, are there any plans for a formal rap battle between streamers?

Thanks Trump, for taking the time to talk with me amidst your busy streaming and tournament schedule. If you’d like to know more about Trump’s thoughts on all things Hearthstone, you can read his most recent Reddit AMA. Be sure to catch Team Value Town in action at the Archon Team League Championships, as they compete for a spot in the satellite round. We wish them the best of luck in the weeks to come! You can follow Trump on Twitch, Facebook, Twitter, and YouTube.