Hearthstone, by it’s very nature, is a game of random chance. From the mulligan phase, to the top-decking, to the effects of the cards themselves. A large part of why professional Hearthstone players stand out from the rest of us, is that they are able to maximize their chances of coming out on top by making the best possible choice in a bad situation. However, sometimes this choice is taken out of their hands due to the card the Random Number Generator (RNG) decides to bestow upon either the player, or their opponent. Join me, as we take a look at a possible solution to this problem that can sometimes cheat pro players out of their rightly deserved winnings.

In the past, tournament organizers have banned certain cards that tended to snowball games very heavily based on RNG, or extreme value. The two cards that made it onto the ban list in the early days of Hearthstone tournaments were Nat Pagle, and Tinkmaster Overspark; both cards were included in almost every high level deck at the time. Nat Pagle was often banned due to the extreme value he represented, in that he drew a card at the end of the turn he was played. Because of his mana cost of 2, and health of 4, he was quite difficult to deal with in the early game. Tinkmaster Overspark made the list because of the massive snowball potential he brought to the game. His ability to target a specific minion with a Battlecry effect that could potentially turn anything into a 5/5 Devilsaur (or a 1/1 Squirrel) meant that on turn 3, your board state could easily out-value the opponent, and leave him with little hope of recovery for the rest of the game. Blizzard nerfed these cards before Hearthstone launched, as they moved into the Open Beta phase to bring a bit more balance to the game. 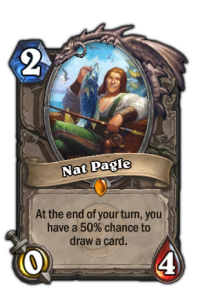 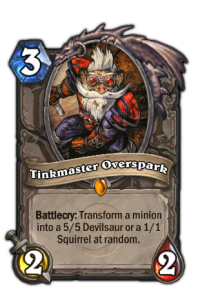 In today’s tournament meta, there are also two cards that represent a large imbalance based on RNG. The Mage card Unstable Portal, and the Neutral card Piloted Shredder were introduced in the Goblins vs. Gnomes expansion. Both cards have the ability to swing games to an instant win, or an instant loss. In the case of Unstable Portal, the mana discount of 3 offered by the card can lead to unmatched value that easily dominates the opposing player. An example of this is when a player gets Archmage Antonidas from a turn 2 Portal, and is able to coin him out on turn 3. At such an early stage of the game, the 7 health of Antonidas is very difficult to remove, and his ability results in incredible value in the from of many free Fireballs when a spell is played. Piloted Shredder, on the other hand, can instantly lose a game for the person that played it. The reason for this is that there is a chance that Doomsayer will drop from the Shredder when it is killed, resulting in a free board clear for the opponent, and the destruction of a lethal board state. Both Unstable Portal, and Piloted Shredder are staples of high level play, and will not be going away any time soon. 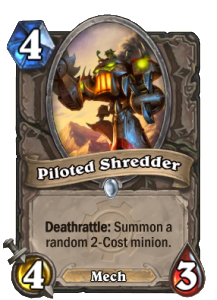 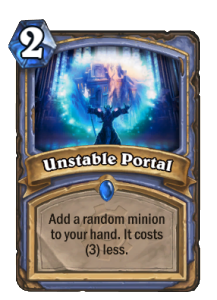 Judging by the fact that Blizzard hasn’t nerfed a card since January of 2015, it is unlikely that they will change these two cards in any way, as they did in the past with Tinkmaster, and Pagle. As such, tournament organizers must take matters into their own hands, and ban the cards from competitive play when tens of thousands of dollars are on the line. Randomness is a part of Hearthstone, and competitive card games in general, there’s no getting around it. However, when there is no chance for a player to make the best possible choice, and the game has been decided by turn 3 RNG that is impossible to play around, something has to change.