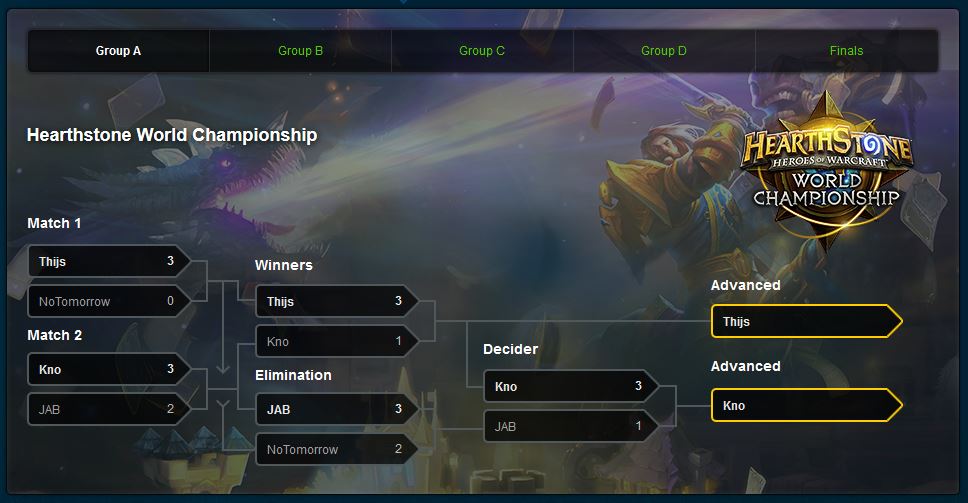 Group A was a powerhouse group that consisted of Thijs NoTomorrow, Kno, and JAB. Thijs advanced as expected going 3-0 against NoTomorrow and 3-1 against Kno. Meanwhile in the bottom half of the bracket Kno sent JAB to the loser’s bracket in a close 3-2 match with Kno eventually taking the victory in the Druid mirror match in game 5. JAB stayed alive in another series that went to all 5 games against NoTomorrow. JAB’s victory set up a re-match with Kno to decide who moved on to the round of 8.

Kno took game 1 with some high tempo play from his hybrid Demon Warlock deck against JAB’s Mage. Kno looked very strong in game 2 as his Murlocs flooded the board with the help of his Murloc Knight as JAB again tried to pick up a win on his Mage deck unsuccessfully. Facing elimination JAB again chose to play his Mage this time against Kno’s Druid in game 4. Kno was unable to play around JAB’s Mirror Entity, being forced to give his opponent a Piloted Shredder and JAB closed out the game after dropping Dr. Boom on turn 7. Down 2 games to 1 JAB chose his Hunter to go up against Kno’s Druid. The early tempo from an Innervated Druid of the Claw combined with some 3 damage Wrath’s was enough to get Kno through the early game and he took the victory soon after 3-1! 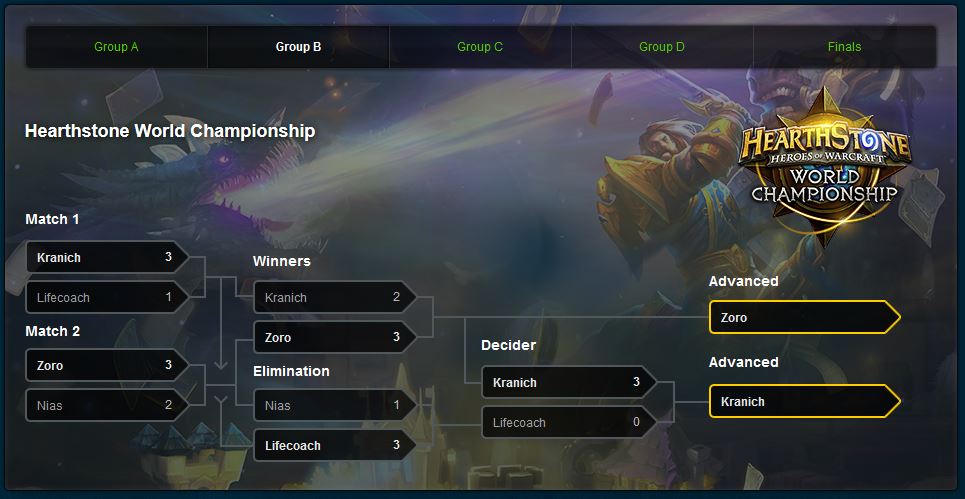 Group B had Kranich, European favorite Lifecoach, Zoro, and the American underdog Nias. Zoro advanced after 2 5 game sets against Nias and Kranich. Meanwhile, Lifecoach fell to Kranich 1-3 but knocked Nias out of the tournament in his next match 3-1 ending Nias’s Cinderella story. Lifecoach’s victory set up a re-match against Kranich to decide the #2 seed coming out of the second group.

Lifecoach had a great shot at winning game 1 with 2 Voidcallers on the board and a Mal’Ganis in hand. However, Kranich had both of his Power Overwhelming’s in hand and when he cleared the taunted up Voidcaller Lifecoach sat back in his chair in disappointment as the Doomguard flew out of his hand, sealing the win for Kranich. Game 2 was also swept away by Kranich after Lifecoach had to leave an Emperor Thaurissan on the board which gave Kranich an opening to launch a Force of Nature double Savage Roar attack for 31 damage. Game 3 saw Lifecoach in the favorable matchup against Kranich’s Midrange Hunter. A coin-ed out Savannah Highmane put Lifecoach under a lot of pressure through the midgame, especially after Kranich had an Owl ready for Lifecoach’s Belcher. At this point Lifecoach was simply unable to recover and Kranich secured the 3-0 sweep a few turns later. 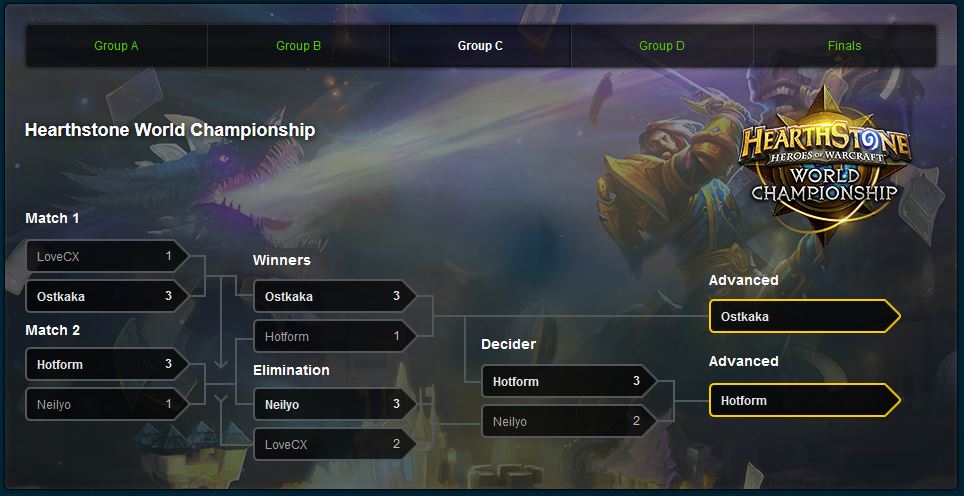 The third group consisted of China’s LoveCX, Europe’s Ostkaka. The Canadian player Hotform and Neilyo hailing from Vietnam rounded out the group. Ostkaka went 3-1 in both of his matches quickly advancing out of the group as the #1 seed. In the bottom half of the bracket Hotform and Neilyo ended up meeting to decide the second player to emerge from group C.

Hotform quickly took the first game with some fiery tempo from his Mage deck. Game 2 brought the series back to even as Neilyo pulled out a victory with his Secret Paladin deck against Hotform’s slower Druid deck. Neilyo continued his winning streak as an Unleash the Hounds paid dividends against Hotform’s Rogue taking advantage of the Violet Apprentice’s flooding the board. Staring down defeat, Hotform again went with his Druid deck this time against Neilyo’s Warrior. Drawing into double Wild Growth on turn 10 allowed Hotform to cycle through his deck to find that Savage Roar that gave him just enough damage to come back to take the win and bring the series to a deciding game 5. The final game saw Hotform’s Rogue against Neilyo’s Warrior. Neilyo desperately attempted to survive the early game stacking up to 43 effective health by turn 7, but Hotform had just enough momentum to continually apply pressure and eventually took the victory after drawing all 30 cards in his deck. 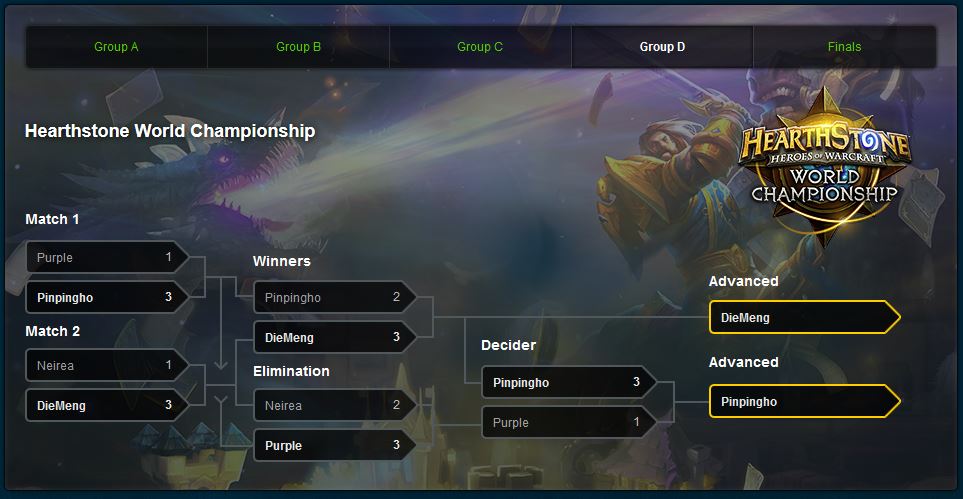 The last group of the tournament saw a number of upsets and some big names fall. The group had NA’s #1 seed Purple, EU star Neirea, China’s DieMeng, and the best Taiwanese player, Pinpingho battling it out. DieMeng was the first to emerge from the group, besting Neirea 3-1 and Pinpingho 3-2. Purple fell to Pinpinho in his first match which set him up for a marathon match against Neirea that went to all 5 games.

Game 1 ended with a wry grin from Neirea as he dropped both of his Doomsayers after Freezing Purple’s nearly full board and they were both silenced by Purple’s twin Keepers. Game 2 featured the Mage mirror match from the Jaina pros. With no cards left in his deck Neirea expertly dropped Purple to 1 health before proccing his Ice Block which forced Purple to surrender because he knew he would die to a hero power next turn. Game 3 was over quickly as Purple’s Rogue was simply unable to stand up to the two Ancient of Wars that Neirea dropped. Needing a win, Purple again chose his trusty Mage deck for game 4. An offensive Alexstrazsa drop gave Purple enough momentum to take the victory after surviving the early game. In the deciding match a strong Loatheb turn put Neirea in a good spot to win with 15 attack worth of minions on the board and a Loatheb effect on a Rogue. However, Purple was ready with a Healbot to buy himself some time as he prepped his final burst. Oil gave his Dagger 7 attack and his Healbot another 3 and he swung in with everything he had for an impressive 24 damage which was just enough to close out the match and put Purple in a position to advance against Pinpingho. His hopes would be dashed in the next match against the Taiwanese player, however, as DieMeng and Pinpingho advanced out of Group D.

The action continues next week! Take a look at the updated bracket here: 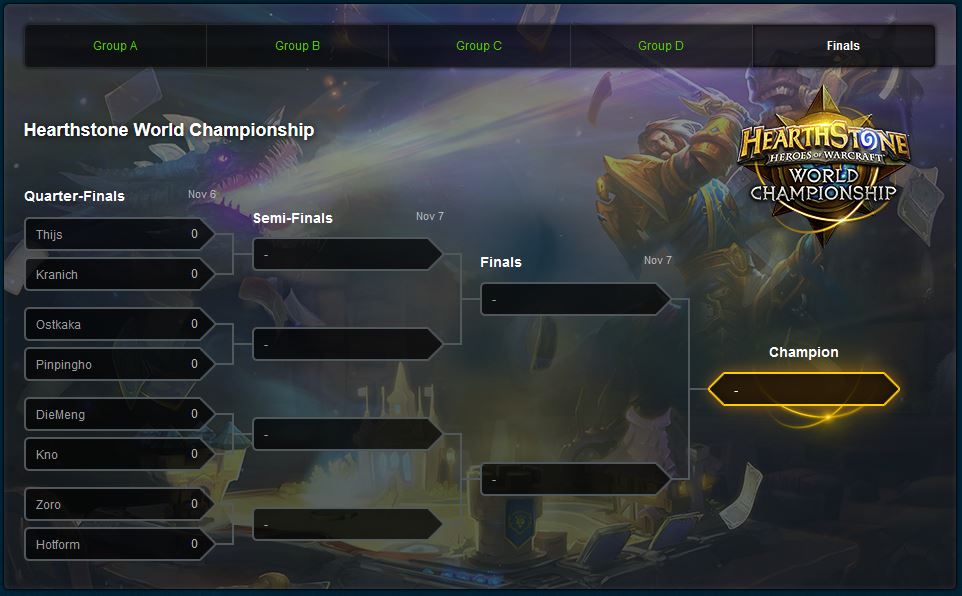 Previous ArticleBlizzcon Preview – The Americas
Next Article Hearthstone’s Next Adventure: The League Of Explorers