The recent announcement of Hearthstone’s newest card set expansion, The Grand Tournament, has naturally set off a whirlwind of speculation in regards to how competitive play will be affected. Not only will the set introduce 132 Argent Tournament-themed cards, it will also add in the new Inspire keyword, a minion effect that triggers whenever a player uses their hero power. The benefits of Inspire and the handful of new cards that Blizzard has already revealed are obvious for some classes (Coldarra Drake + Shaman = a whole bunch of totems), but not so obvious for others. Rogue is one class that, while somewhat viable in ranked mode thanks to the popular Oil Rogue deck, has always played second fiddle to more consistent classes like Mage and Hunter. However, all that could change with The Grand Tournament.

Of the Grand Tournament cards that have been revealed so far, not many of them really benefit the Rogue directly (with the obvious exceptions of Justicar Trueheart and Maiden of the Lake but they both benefit all classes). Skycap’n Kragg could give pirate decks a boost and Nexus-Champion Saraad could help spice up your normal combo routines but other than that it’s slim pickings for Rogues (at least for now). Coldarra Drake is virtually useless since a player can only attack once per turn and the conservative weapon use that serves as the staple of Oil Rogue decks makes Frost Giant an unappealing option as well. 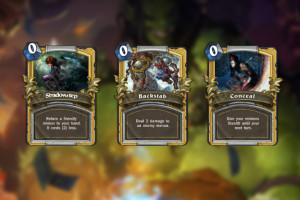 It would be neat if Blizzard found some creative uses for Rogue-specific Inspire minions that not only made the Rogue more versatile but which also fit the class’s theme. For instance, what about a minion that gained stealth whenever its Inspire effect was triggered? This could allow for some sneaky hit-and-run tactics with a player having their minions attack and then triggering their hero power to protect them during their opponent’s next turn. Another potential Inspire would be allowing the player to attack twice in one turn, handy if the Rogue player wanted to clear out some of their opponent’s weaker minions (and devastating if combined with Justicar Trueheart).

Legendary minions are another area where the Rogue tends to come up short in relation to other classes. Both VanCleef and Gallywix are highly situational and neither really sees much use in high-end tournament play (though VanCleef can be a monster under the right circumstances). The Grand Tournament could be an opportunity for Blizzard to bolster the Rogue’s legendary options, again with the end goal of making the class more viable and versatile.

Potential legendaries could include Mathias Shaw, a 4/4 for 5 mana who, if played as a combo, summons two 2/3 SI:7 agent minions when he is played, Vanessa VanCleef, a 2/3 for 4 mana who grants all friendly pirate minions (or maybe even all friendly minions) stealth when played and Garona Halforcen, a 4/6 for 7 mana who instantly destroys any one enemy minion when played and also gives the player +4 attack if played as a combo.

Giving the Rogue additional options is about more than dreaming up new legendaries and going wild with Inspire effects (as fun as those two activities are). Adding in some class-themed basic cards such as maybe Killing Spree (an 8 mana cost spell that gives all friendly minions on the board either charge or windfury for one turn), crippling poison (a 3 cost spell that allows the player to freeze minions with their weapon attacks) or Combat Kick (a 4 cost spell that silences an enemy minion and, if played as a combo, reduces their attack to 1) could also help to open up new strategies beyond the tried and true Oil Rogue.

The Rogue has always excelled at controlling the board and dealing out massive damage, but some new Grand Tournament additions could help to freshen the class up and maybe even inspire competitive players to look beyond the same old Oil Rogue variations. Obviously tournament-level players aren’t overly concerned with variety but a few new Rogue options could also help to ease new players into the competitive scene and even open up new synergy potential for existing Rogue cards that wasn’t possible before the new cards were introduced. Maintaining balance in Hearthstone is a delicate game that Blizzard plays every day but with some ingenuity and a little luck, The Grand Tournament could be the Rogue’s time to shine.

Nathaniel Hohl has been an avid Hearthstone player ever since the game's glorious (depending on who you ask) beta days. In addition to playing Hearthstone he is also a passionate games journalist who enjoys writing about games almost as much as he does playing them. His work can be found at ShackNews, GameCrate, Design & Trend, and, of course, here at Hearthstonely.