One of the things that I love about Hearthstone is its constantly evolving and growing landscape, or what many people refer to as “The Meta”. We’ll go on a trip through Hearthstone’s history remembering with fondness the most “OP” decks of each season. 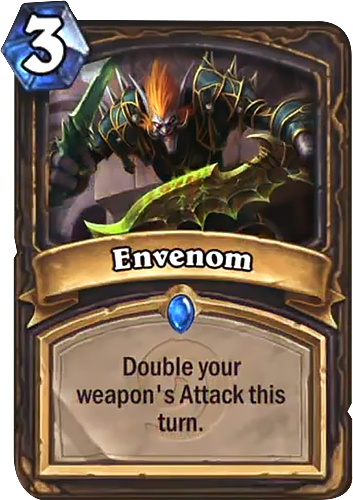 Early in the Alpha stages of the Beta test of Hearthstone, the Rogue’s hero power worked a little differently. It not only read “equip a 1 / 2 dagger” but also had the text “if you already have a weapon equipped, add 1 attack to your weapon”. The secondary effect was permanent, which ended up being extremely frustrating to play against due to another Rogue card which has since been totally removed from the game: Envenom. Envenom was a 3 cost Rogue spell which read: “Double the attack power of your weapon this turn only.” So most Rogue decks ran 2 copies of Envenom, and a ton of removal, the goal of the deck was to survive until you drew both Envenoms, get your weapon up to 7 or 8 attacks, double Envenom and swing in for 30 damage in one turn. Needless to say, it was very infuriating to play against, and the hero power and Envenom were nerfed before the game reached closed beta.

One of the most popular decks from the Beta stage of the game, this was back when Frost Nova and Cone of Cold were cheaper, allowing this deck the breathing room to deal with faster decks while still retaining all of its power against slow decks. This deck was feared throughout the ladder, but it was countered by the dreaded…

This was my first “real” deck; I actually spent $20 on packs during the Beta just so that I could craft this deck. You basically ran a ton of low cost beasts, Buzzard, Timber Wolves, Dragonhawks, Stonetusk Boars, and Unleash the Hounds. Back then, Unleash the Hounds was a 1 cost spell that read, “Give all your Beasts +1 attack and charge.” So you basically used removal such as Explosive Traps, Snipes, Explosive Shot, Deadly Shot, and Kill Command to keep your opponent’s board clear until you could drop all your beasts, give them charge, and swing in for 20-30 damage in one turn. This deck pretty much made slow decks unplayable in 2013 as it was able to usually win by turn 7 or 8.

Blizzard’s first reaction to the OTK deck was to simply change Unleash the Hounds entirely. Now it was a 2 cost spell that read “For each enemy minion, summon a 1/1 hound with charge.” When combined with Buzzard this made for some ridiculous card draw which when integrated with the early game power that Hunters are still known for created a lot of unwinnable matchups and annoying games. 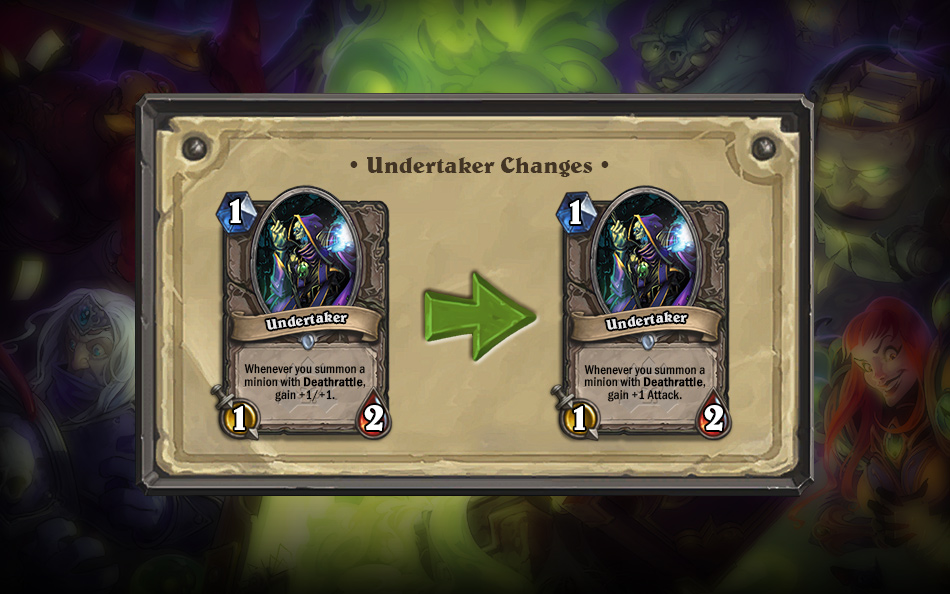 With the release of the first expansion for Hearthstone, 35 new cards were released which shook up the Meta quite a bit. The most notable card of these 35 was a little guy who loved Monty Python, Undertaker. The 1 cost 1/2 was so strong because for every deathrattle played he would gain +1 +1. This made decks like Hunter and Warlock incredibly good because if they even played 1 or 2 deathrattles after dropping this guy he was tanky enough to avoid a lot of removal and strong enough to threaten lethal very early. Quite simply, he won games by himself a lot of the time and he was nerfed in early 2015 to only gain +1 instead of +1 +1 and promptly dropped off the face of the planet.

Now that Blizzard had finally released a successful expansion to Hearthstone, they were ready to up the ante and release a metric TON of new cards with the GvG expansion set featuring a whopping 123 new cards! The class that benefitted the most from the influx of new cards was certainly the Mage. The dual board clear and body of the Goblin Blastmage combined with the removal and freeze power of the Flamecannon and Snowchugger were incredibly hard to deal with. Not to mention the synergy between spare parts and Antonidas for the late game. The new GvG cards made Mage one of-if not the-most powerful deck because in the mulligan phase you couldn’t be certain if you were facing a Mech Mage or a Freeze Mage.

When the cards for BRM were originally announced, everyone thought that the new Dragon archetype was going to reign supreme over the Meta game, however people soon realized the raw power of the two most broken cards to be released from BRM: Grim Patron and Emperor Thaurissan. The Patron created a whole new deck by himself with his ridiculous synergy in warrior decks, elevating the class to top tier in competitive play when it was already very good. Meanwhile, Thaurissan basically became a must-play in almost any slow deck simply because of the value and options he creates by reducing the mana cost of all cards in your hand. Furthermore, he forces your opponent to deal with him because if he is not dealt with his value will increase exponentially with each turn he survives.

I’m excited for Blizzard’s big launch announcement on the 22nd. I’m guessing that’s when they’ll reveal the next expansion set and possibly some of the new cards and people like me can start theory-crafting anew! Until then, I hope you liked my Hearthstone meta history lesson!