During the last three months, many Fireside Gathering tournaments were held across the country. After the grueling online tournaments the field has been narrowed from 107 players to the top 8.

In the round of 8, Kevan, timmahtim, CapnCrunch, and puffin moved on to the semi-finals. Kevan and timmahtim met in their half of the semi-finals. The series quickly got off to a 1-1 affair with each player taking a game. In the third game Kevan’s Warrior faced timmahtim’s Druid deck. Timmahtim got off to an excellent start managing to get both of his Shades of Naxxrammas on the board early following that up by using Harrison Jones to destroy Kevan’s Death’s Bite. Next turn Kevan was able to clear both Shades from timmahtim’s board but It wasn’t enough as timmahtim swung in for lethal with a Force of Nature and Keeper of the Grove combo for exact lethal.

In game 4 timmahtim’s Oil Rogue took the board while Kevan gave his Warrior deck another shot. Timmahtim was able to get a ton of damage in hand with an early Sprint and was able to swing in for a combined 21 damage with Southsea Deckhand, Deadly Poison, Oil, Goblin Auto-Barber and a Blade Flurry to bring Kevan down to just 4 health on turn 8. Kevan was able to clear the board but timmahtim had 6 damage in hand on turn 9 to hit for exact lethal giving him the series win and a trip to the finals.

In the other semi-final matchup CapnCrunch went up against puffin. Game 1 went quickly in favor of puffin as his Paladin deck was able to clear CapnCrunch’s Eaglehorn Bow with Harrison and then make him a 10/8 taunt with Argus and Blessing of Kings. With a Webspinner and two Kill Commands in hand CapnCrunch realized that he was one damage off lethal and puffin took the win soon after. In game 2 both players picked their Patron Warrior decks. CapnCrunch was able to get his combo off first, flooding the board with three Patrons on turn 7. However, next turn puffin took full advantage of getting 2 turns of value from his Emperor earlier and was able to chunk down CapnCrunch with a monstrous 26 attack Frothing Berserker after playing Whirlwind, Inner Rage, and Unstable Ghoul. This brought the series to a win-or-go-home situation for CapnCrunch down 0-2. CapnCrunch chose his Patron Warrior deck again, this time facing puffin’s Druid deck and quickly forced puffin to play a Force of Nature Savage Roar combo just to deal with all his Patrons and his Frothing Berserker. Puffin almost brought the game all the way back but CapnCrunch finally drew a Warsong Commander which allowed him to swing in for lethal with a Frothing Berserker. In game 4 Harrison Jones was once again the MVP, getting two cards and destroying CapnCrunch’s Eaglehorn Bow. At this point CapnCrunch was simply too far behind and couldn’t get through puffin’s Ancient of War and conceded soon after giving Puffin the win and a ticket to the grand finals to face timmahtim.

In the first match of the grand finals it was timmahtim’s Druid vs Puffin’s Warrior. Both players spent a lot of cards and mana trying to clear each other’s boards throughout the early game. Timmahtim curved nicely into Dr. Boom but it was cleared after a clutch Whirlwind draw let puffin kill it with an Execute. This game went very late but timmahtim ended up finally taking the win after a Druid of the Claw in cat form brought puffin low enough for the good ol’ Force of Nature Savage Roar combo to claim game 1.

Game 2 featured another Warrior mirror matchup. Puffin drew Emperor right on turn 6 which instantly gave him 8 mana in value. Puffin filled up his board first creating a bunch of patrons but Timmahtim countered with a double Frothing Berserker turn to swing in for a staggering 46 damage.

Game 3 was do-or-die for Puffin down 2-0 to the newcomer timmahtim. Timmahtim now only needed to win one game with his Oil Rogue deck. Timmahtim had a great turn 6 as a 4 damage Blade Flurry was able to take out all of Puffin’s Grim Patrons. Puffin was desperate sitting at 9 health and staring down lethal when he managed to top-deck a Harrison Jones to put timmahtim’s 6/1 dagger in the museum. With the tempo now back in puffin’s favor he was able to build up a sizeable board and gain some life back with an Armorsmith but timmahtim found a blade flurry to clear the board and then next turn was able to swing in again with the Southsea Deckhand and Eviscerate for game, set, tournament for timmahtim!

Congratulations to Timmahtim! With his victory he qualifies for the North American Regional tournament which gives him a direct shot at going to Blizzcon! If you want to watch the matches they can be found here. 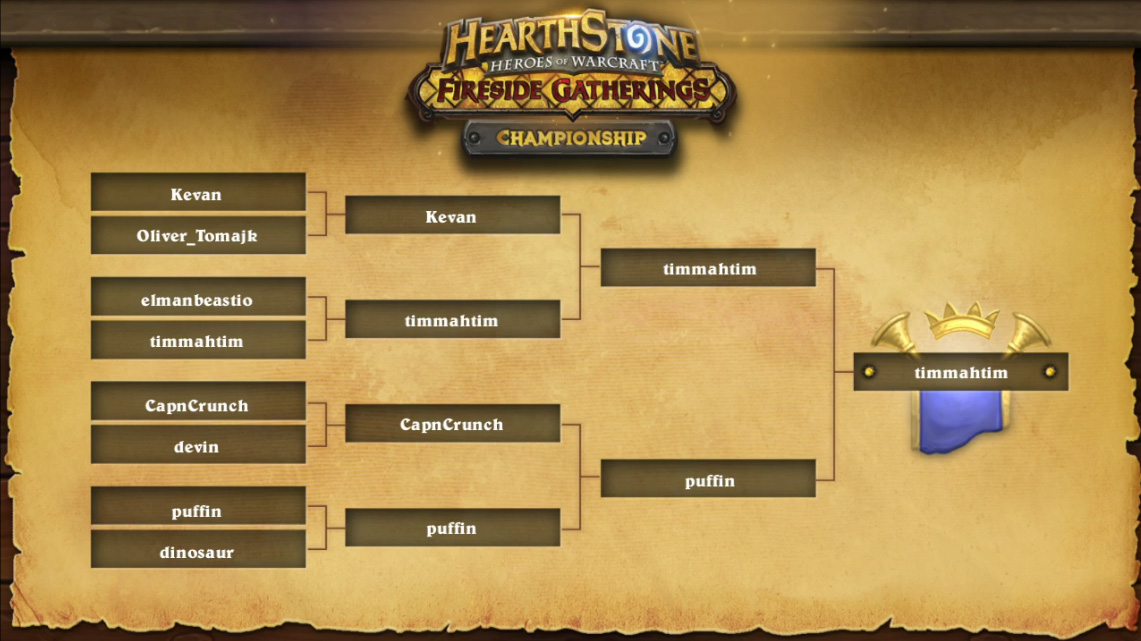 Previous ArticleZen And The Art Of Hearthstone
Next Article The Grand Tournament Cards Pt 4: Video Review