After 2 days of intense Hearthstone action, we now know the four players that will represent North America in the World Championships at Blizzcon.

The tournament featured two groups of four players each. The Americans in Group A included Team Hearthlytics’ JAB and Team SoloMid’s Trump. Purpledrank from Canada with GamersOrigen and Brazil’s pride, Coreia from Keyd Stars rounded out the first group.

JAB met Trump in the first match and the results would set the tone for the rest of the tournament. JAB protected his board with a Belcher just long enough to use double Savage Roar to swing in for 29 damage against Trump’s Warrior deck to take game one. In game two, JAB obtained a Starving Buzzard from his Webspinner and it ended up giving him four cards which was enough advantage for him to take the win against Trump’s Paladin a few turns later. Game three was sealed by Trump after a late game Lay on Hands draw gave him enough resources to shut down JAB’s Mage. In game four Trump top-decked his Dr. Boom followed by Grommash after JAB had already shown his removal and Trump tied up the series 2-2. In a spectacular game five JAB only had to deal 7 damage to Trump to take the series and with no cards in hand and just a Flamewaker on the board it was looking grim, however, a Spellslinger off the top gave him a Tracking which allowed him to search for his one remaining Fireball and he removed his headset triumphantly as the Flamewaker hit Trump’s face for the last point of health.

Coreia faced off against Purpledrank in the second match of the day. Purple took the win with his Druid after both of his Boom Bots hit face for eight damage in game one. Purple took a commanding lead in game two after getting two turns out of his Emperor and went up 2-0 in the series soon after. Coreia quickly brought the series back to 2-2 with wins on his Handlock and Warrior, but Purple would have the last laugh with a win on his Warrior against Coreia’s Hunter.

In the next series, JAB faced off against Purple. In a lightning fast affair, Purple took all three games with Warrior, Druid, and Warlock in 25 minutes. Coreia pulled out a great game on his Handlock deck to secure the victory against Trump 3-2 in the following series, and then Purple and Coreia met in the tiebreaker to decide the second seed in group A. Coreia got off to a strong start, quickly finding a win with his Hunter deck but Purple countered with a win on his Warlock and Druid to go up 2-1. In game four Purple managed to survive long enough against Coreia’s Warlock to send in a massive 17 attack Frothing Berserker for the win.

In Group B, newcomer and self-proclaimed casual player Nias went a convincing 2-0 against the likes of Canada’s Hotform and Vlps. Vlps and Hotform managed to pick up 1 win each which set them up for the deciding match. In game 1 Vlps had a tough matchup playing Hunter into Warrior and Hotform took game 1 in convincing fashion. In game 2 Vlps again lost with his Hunter this time against Hotform’s Mage as he top decked a Fireball just when he needed it to close out the game. Vlps finally managed to grab a win on his Hunter against Hotform’s Druid with a clutch Ironbeak Owl to keep his hopes alive but that hope would be short-lived as Hotform punched his ticket to the semifinals with a Force of Nature Savage Roar combo in game 4. 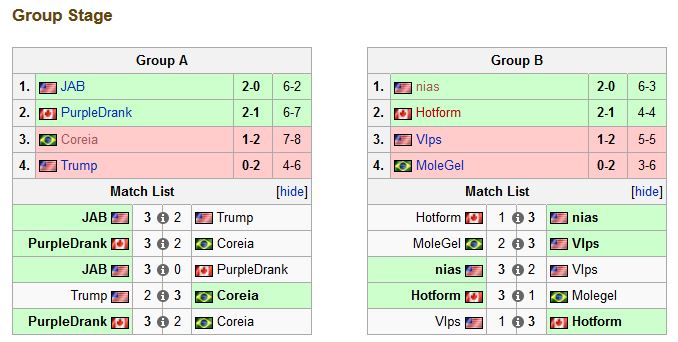