After a day packed with action and many back and forth series, we now know the four players that will represent Europe at BlizzCon.

For those of you who may be knew to the scene and need to play catch-up, the European Championship featured two groups with four players in each group and was played in a double elimination format. This means that while you may lose one series to an opponent you still have a chance to redeem yourself and take home the trophy. First, the top half of the bracket face each other, and then the bottom half of the bracket play against each other. The winner of each of these matches then go on to play versus each other. Whoever wins that match is automatically through to the next round. The two losers also play a series and the winner of that match gets to play the loser of the winners’ series. Whoever then wins that match is the second person to go through. The double elimination format is a good way to ensure that the best players proceed as you have to beat at least two of the others in the group.

Group 1 featured ThijsNL, Maverick, Hoej and Ostkaka, while Group 2 had Neira, Lifecoach, Pavel and Gera89. Team Nihilum’s ThijsNL and Team Liquid’s Neira both beat their two opponents and got out of their respective group as first seeds. Ostkaka and Lifecoach had to beat Hoej and Pavel respectively to take the second place in each of their groups. 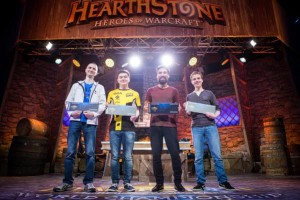 The day featured a myriad of games, from slow control-based decks like Handlock and combo-powers like the much loved and hated Patron Warrior. Interestingly, most players had brought a druid deck, playing a fast paced combo/ramp Druid knowing that it can burst most match-ups. These three classes were definitely the most popular, but there were a few outliers. Hoej brought both Paladin and Hunter, which worked for him versus Maverick, but his Hunter would later fall to Ostkaka’s Priest, which was the other unusual class choice. It almost cost him his BlizzCon ticket as it would fall to both Hoej’s Paladin and his Druid, but in the last game of the series Ostkaka managed to take the win over the Hunter as his dragons wreaked havoc.

The first semi-finals were ThijsNL versus Lifecoach. Most people had thought that Lifecoach would take it, but he was unable to find a single win with his Patron Warrior, falling to ThijsNL’s Druid, Handlock and in the mirror match-up.

Neira and Ostkaka in the other bracket ended with a 3-1 to Neira, with Ostkaka only able to find a win against Neira’s Handlock with the Patron Warrior.

Despite their losses in the semi-finals, both Lifecoach and Ostkaka can feel extremely happy that they earned their tickets to BlizzCon and they will have a chance to fight for the first place prize of $100,000 there.

Tomorrow, Neira and ThijsNL will fight in a single elimination series to see who takes home the official title as the European Champion and the $10,000 prize pool. Be sure to follow the action on Twitch, starting at 14.30 CEST.