After yesterday’s multitude of series and players fighting for their BlizzCon ticket, today featured only one series. One series to determine who the best player in Europe is and which player would win the $10,000 prize. Having decimated their opponents in the semi-finals only Team Liquid’s Neirea and Gamers2’s ThijsNL remained. They would play each other in a best of five, with both of them bringing a Patron Warrior, Druid, and a Handlock deck. However, they did have slight variations in their decks, but with so much potential for mirror match-ups this would be test of skill, card choices and drawing the right cards.

The series immediately kicked off with a mirror match, both of the players having opted to use their Patron Warriors in an attempt to secure an early victory.

ThijsNL had a Grim Patron and an Armorsmith in his starting hand, while Neirea had the Death’s bite and the spells that were needed to make the combo strong, but no actual combo minions. While Neirea found a Frothing Berserker and a Warsong Commander quite quickly he couldn’t find the patron. With both players having awkward hands, they drew cards and armoured up in the early game. ThijsNL made the first move with his patrons and took control of the board, taking Neirea down to half health, but even as he played the patrons, we could see Neirea start to count the damage that he could do. He had drawn into his second berserker, and with so many minions on the board Neirea advantage of all the patrons that ThijsNL had just played and managed to buff his berserkers with a crazy amout of 19 damage each, obliterating ThijsNL in one turn.

In the second game, Neirea tried to continue his win with a quick Druid game, but this time ThijsNL would find the victory with his patrons. He consistently dealt with Neirea’s board, armoured up and finally found the cards he needed to burst the Druid. Even the RNG favoured ThijsNL as he had a perfect brawl, destroying all of Neirea’s minions and leaving his Gnomish Inventor to deal with the Whirling Zap-o-matic that spawned from the Neirea’s Piloted Shredder. By turn 10 ThijsNL had perfect damage for lethal. Having set up his patrons the turn before he drew into the frothing berserker and evened out the score. 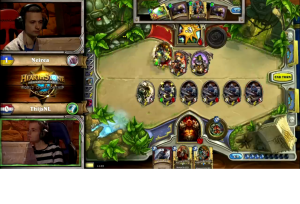 The third game featured another mirror matchup. This time it was Druid versus Druid with neither player drawing into any decent early cards. However, after an early savage roar to clear Neirea’s board, ThijsNL kept board control – constantly making sure to clear any minion Neirea played, knowing that the Druid’s win condition is made so much easier with minions on board to utilize the savage roar when a combo is played.

After winning that mirror matchup, ThijsNL only needed one more game to become the European Champion. Neirea could have kept playing Druid, but chose to switch to Warlock, opting into the third mirror match-up of the series, with each player so far having won one. This was the ultimate test who the better player was. The last game escalated rapidly, with ThijsNL playing an early Void Caller which was traded into Neirea’s Twilight Drake, which summoned Jaraxxus onto the board as a strong 3/15 body. After this, the board stayed under ThijsNL’s control. Fittingly, the final play was also made with a Void Caller, this time summoning a Doomguard for ThijsNL and giving him enough damage to finish the game and becoming the European Champion of 2015. 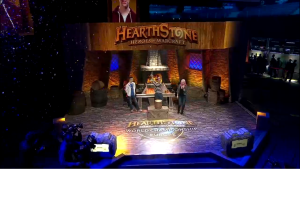 We look forward to seeing what ThijsNL can bring to BlizzCon and how far he can go when he faces the best players from each region around the world. He showed incredible consistency this tournament – winning every series against his opponents – not even dropping a single game versus Lifecoach in the semi-final. This is definitely a player to watch. Congratulations to ThijsNL and may he represent Europe well at BlizzCon!

Previous ArticleRecap: European Championship Day 1
Next Article An Interview With Shoop Of Team vS: We Talk Hearthstone, Chess, and Team Dynamics